The End (sniff) of this Journey

We made it to — sunny California.

It actually rained in the desert–Hurricane Rosa effect centered in Mexico. 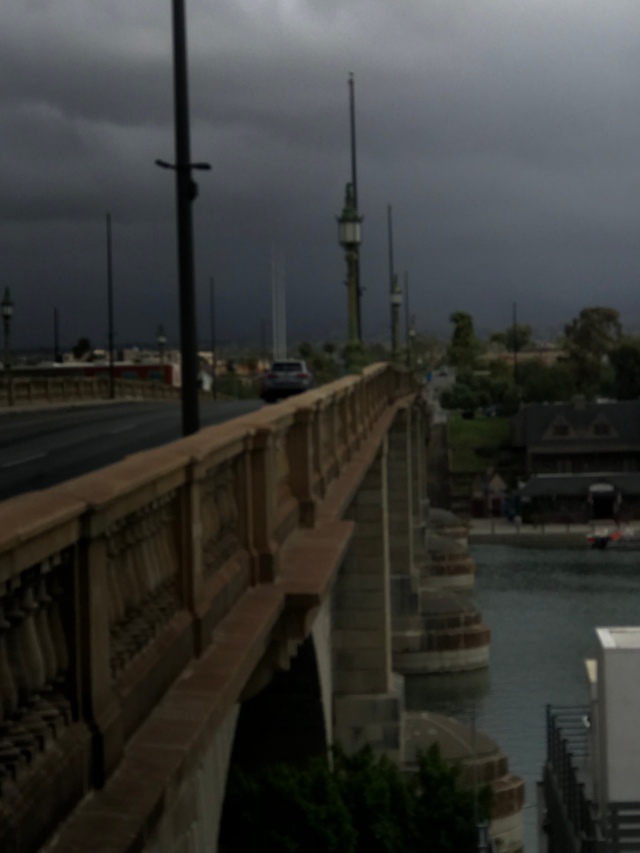 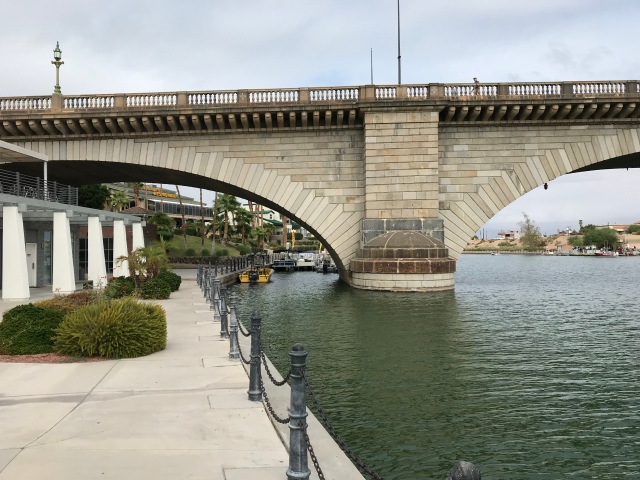 The bridge was brought over in 1968 by Robert McCulloch, Sr.:

He purchased it after reading that London was planning to tear it down to build a new bridge.

I’ll admit it does look strange (even though does look at home there) to see the bridge in the middle of desert in Arizona somehow it works:

We then got back on this long ribbon of highway and drove through the San Gabriel Mountains toward Pasadena: 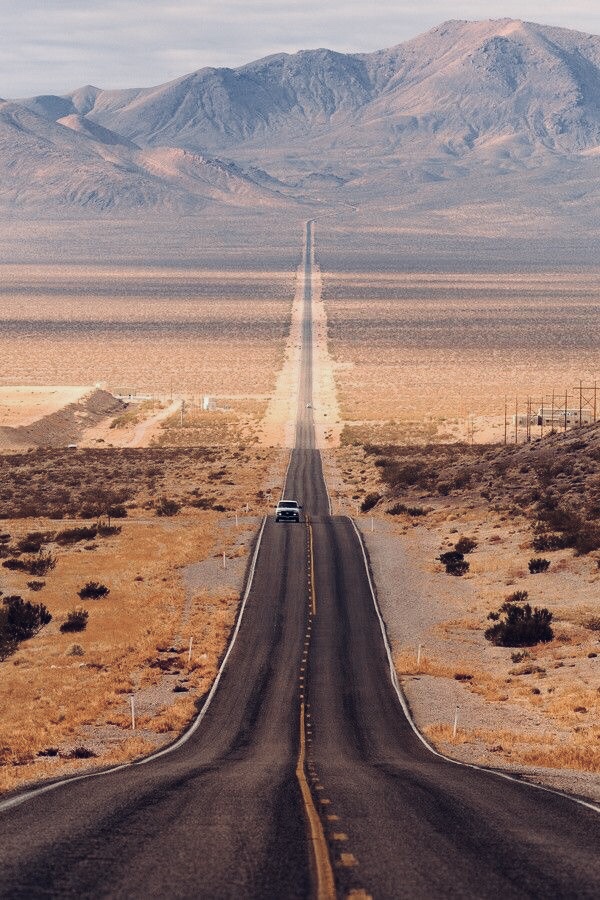 We entered Needles, CA later in the day. 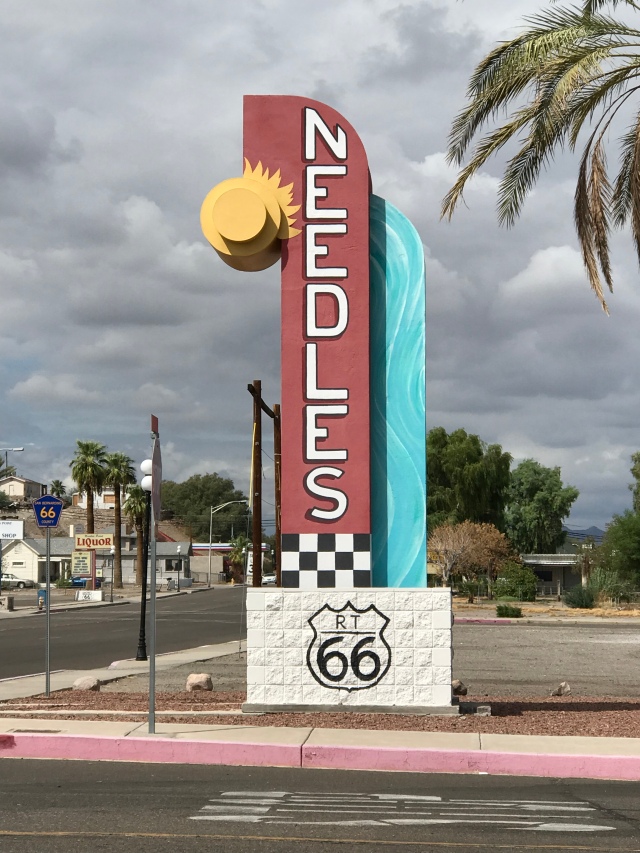 Needles has approximately 5,000 inhabitants including many Native Americans. We found the city museum located across from the refurbished El Garces hotel:

No longer a hotel — it’s empty and owned by the railroad. Originally it was operated for the railroad by Fred Harvey:

These are Harvey Girls (they were called this):

These are old photos taken nearly 90-years ago:

I met a man in the town museum who’s mother worked as a Harvey girl. He said she’d loved it.

As we left Needles we saw this mural: 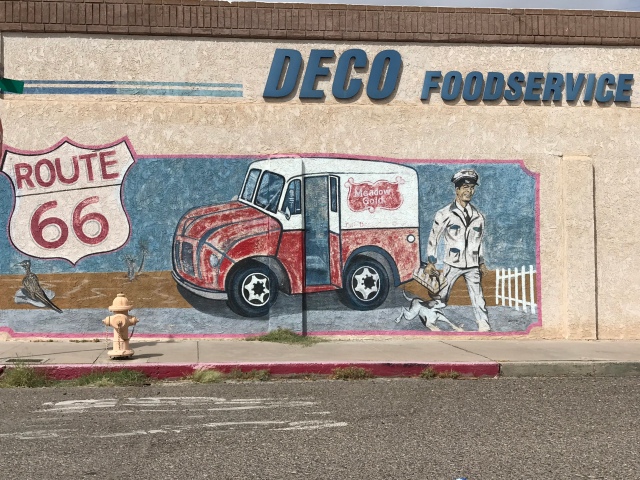 We re-entered I-40 and drove westward.

In Victorville we found the Summit Inn sign — an inn and diner once frequently patronized by Elvis Presley. The structure is gone due to the freeway. This is all that’s left: 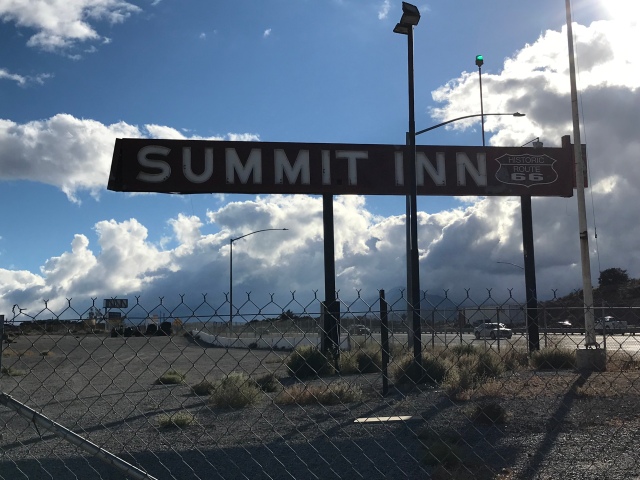 Our next stop at a rest area had this warning — won’t see this in the Midwest:

Never did spy any snakes.

Then it was on to Newberry Springs, CA. There we searched for the Bagdad Cafe: 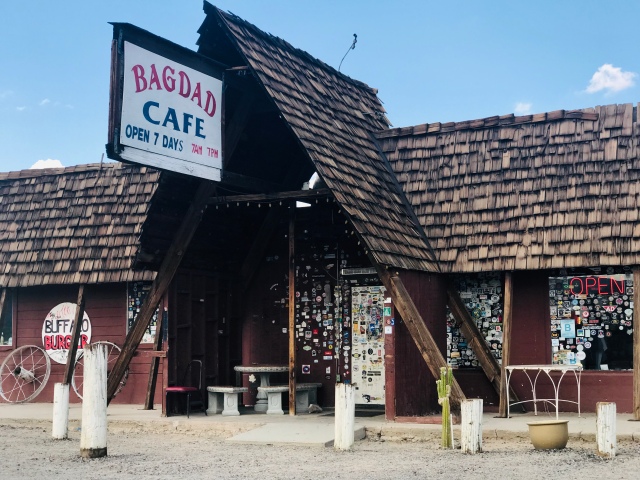 It was in rough shape.

Driving to Pasadena we saw several “dust devils” — a small “twister” of sorts made from wind and sand:

We arrived in Arcadia , CA found lodging and began our final searches– Pasadena was in our sights:

In Pasadena we went the Colorado Blvd “suicide” bridge near the Rose Bowl: 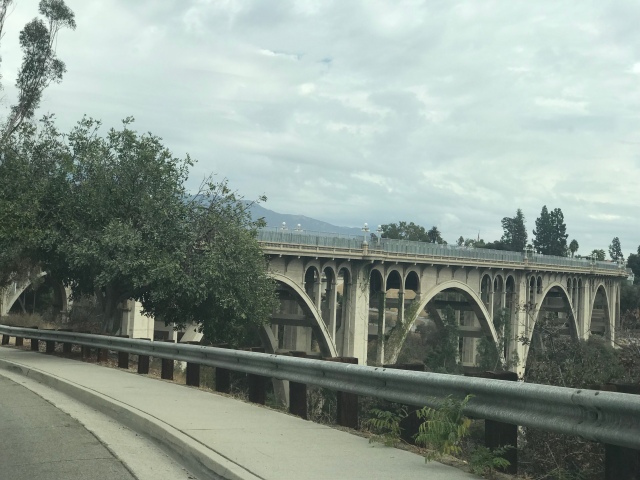 Local officials have put fences on either side of the bridge to prevent suicides — most use to be linked to patients at an adjacent sanitarium– now a hotel.

Next we found the Rose Bowl which has been used primarily for the Olympics and football:

There was information on Jackie Robinson during on his college years: 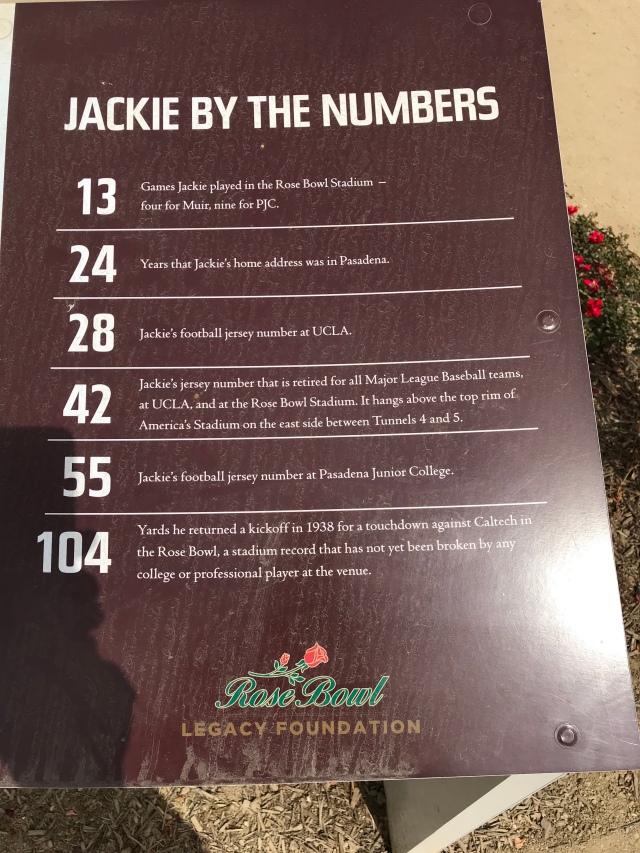 One final find in Pasadena was this pharmacy and soda fountain — didn’t eat because weren’t hungry: 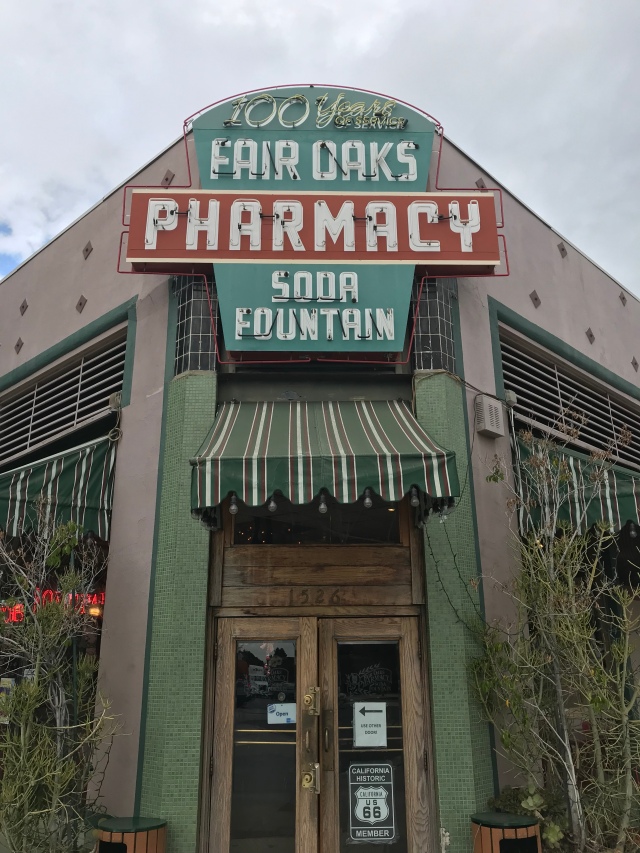 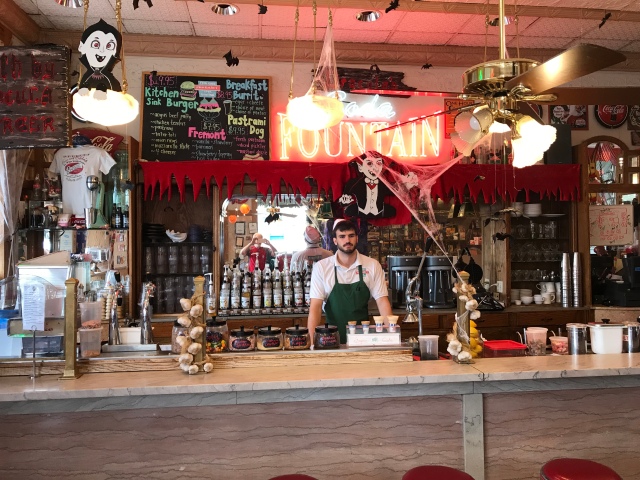 Nearby was the Marston’s Diner;

Before leaving the town we saw:

With an inner courtyard that had this fountain: 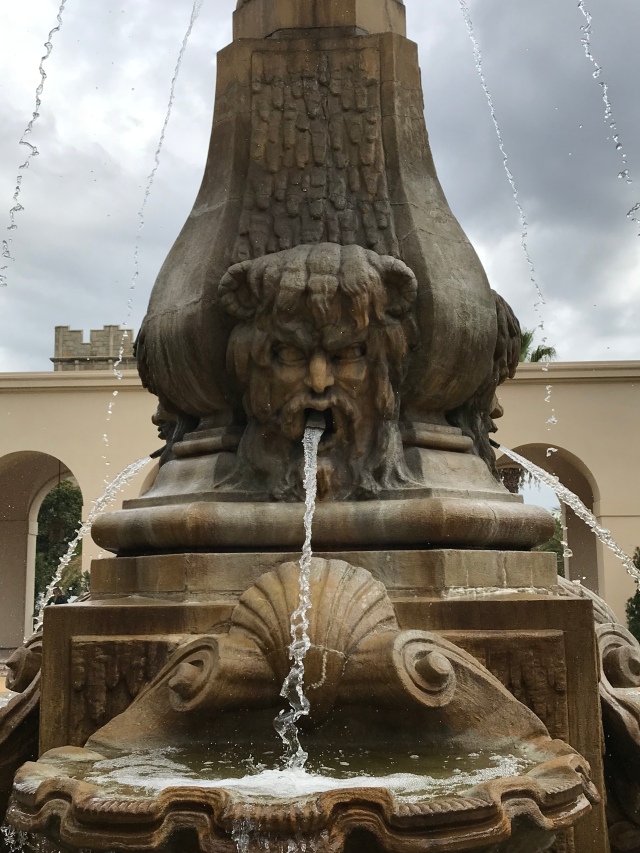 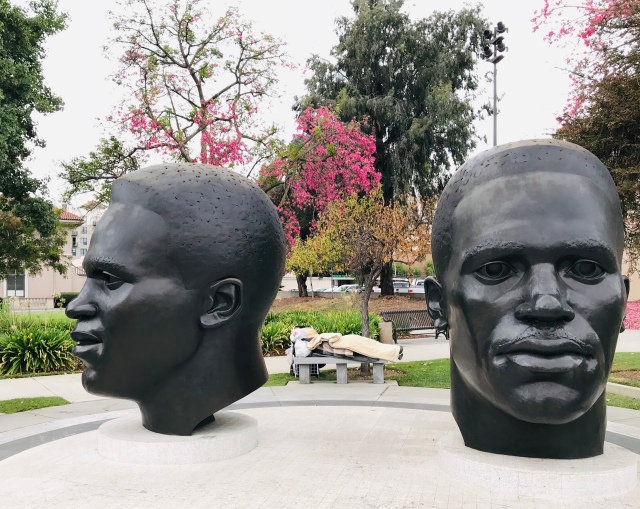 The men above helped plan civic area of Pasadena.

We hopped onto Highway 134 to make our final run to Santa Monica.

We drove through Los Angeles along the last stretch of Route 66.

In downtown LA We saw Cliftons on Broadway – under renovation;

We continued to drive to the final destination — Santa Monica (Pier): 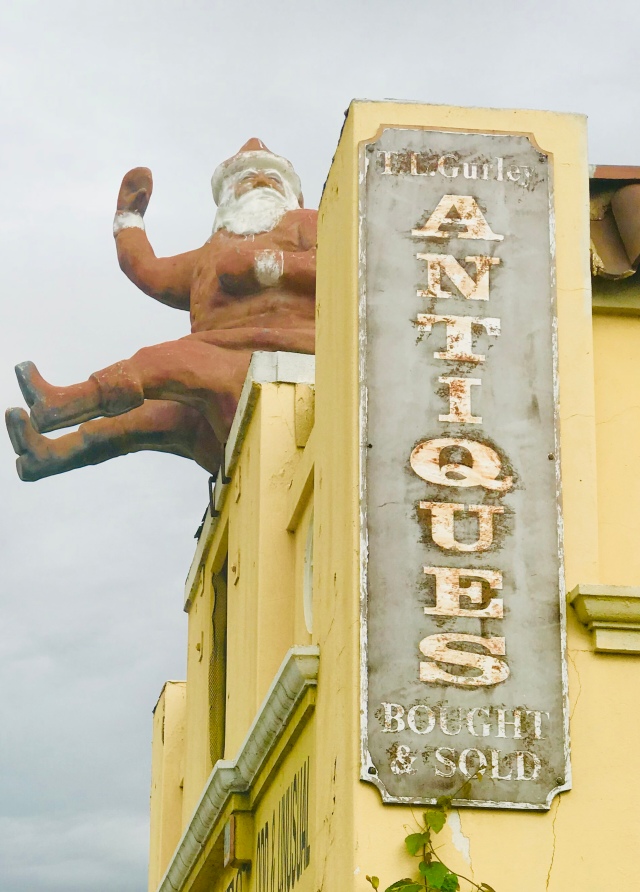 This was the last point on our journey west:

Rarely does something look so good.

Glad we did it and glad it’s done!

What a trip! Soon we’ll be heading home–wow!

I'm retired. Travel a lot.
View all posts by tourdetom →
This entry was posted in Uncategorized. Bookmark the permalink.

1 Response to The End (sniff) of this Journey